Also known as the Baton Rouge Fairgrounds, Airline Highway Park occupies well over 100 acres along US Hwy. 61 at the southern edge of East Baton Rouge Parish where Ward Creek meets historic Bayou Manchac. A park master planning process has been initiated by BREC to upgrade Airline Highway Park to a "Community Park" as defined by BREC's Imagine Your Parks 2 strategic plan. When improvements are made, Airline will be added to BREC's list of 12 Community Parks, filling a gap in outdoor recreation service to residents in the southeast corner of the parish as identified in the strategic plan. 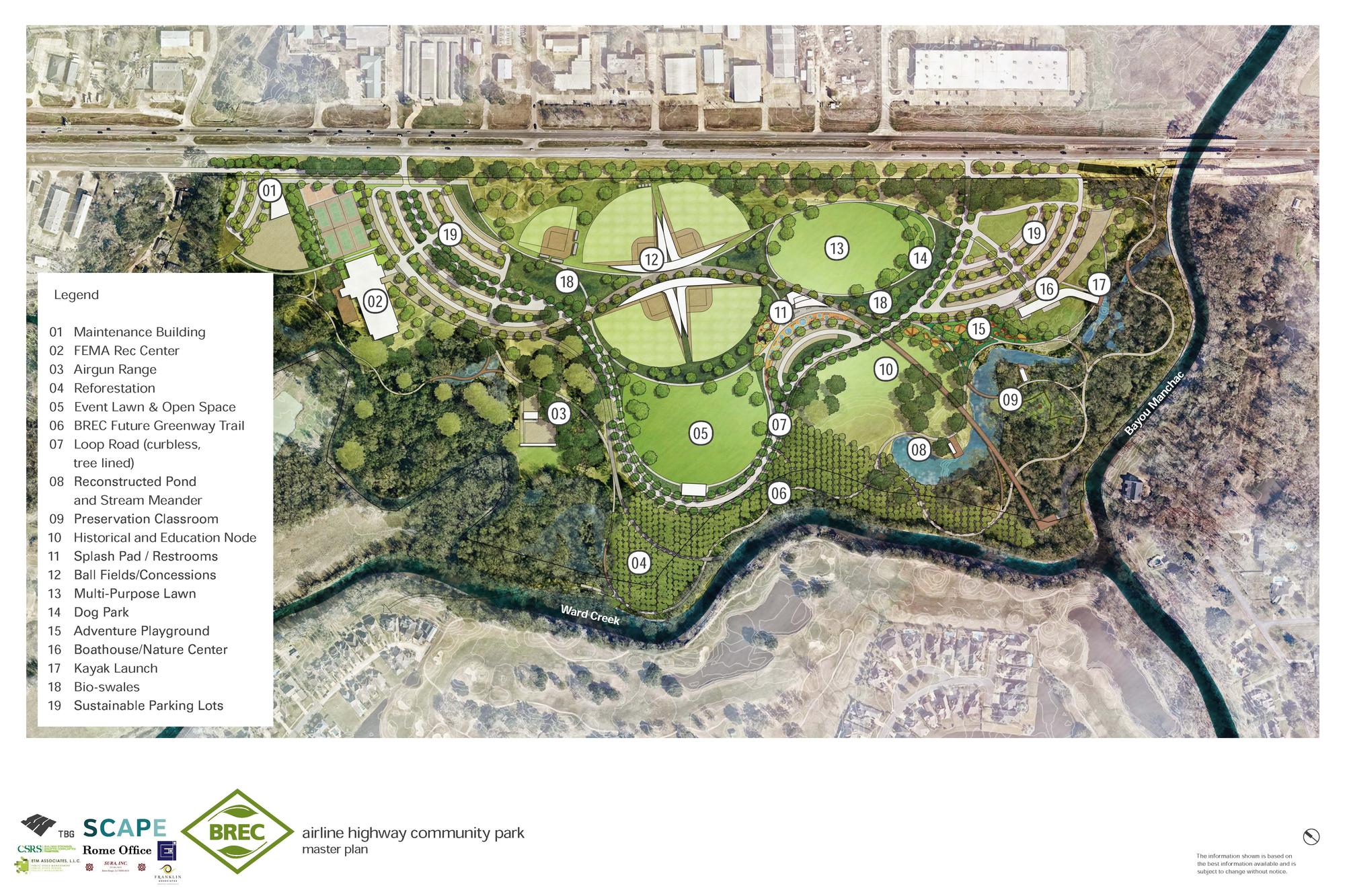 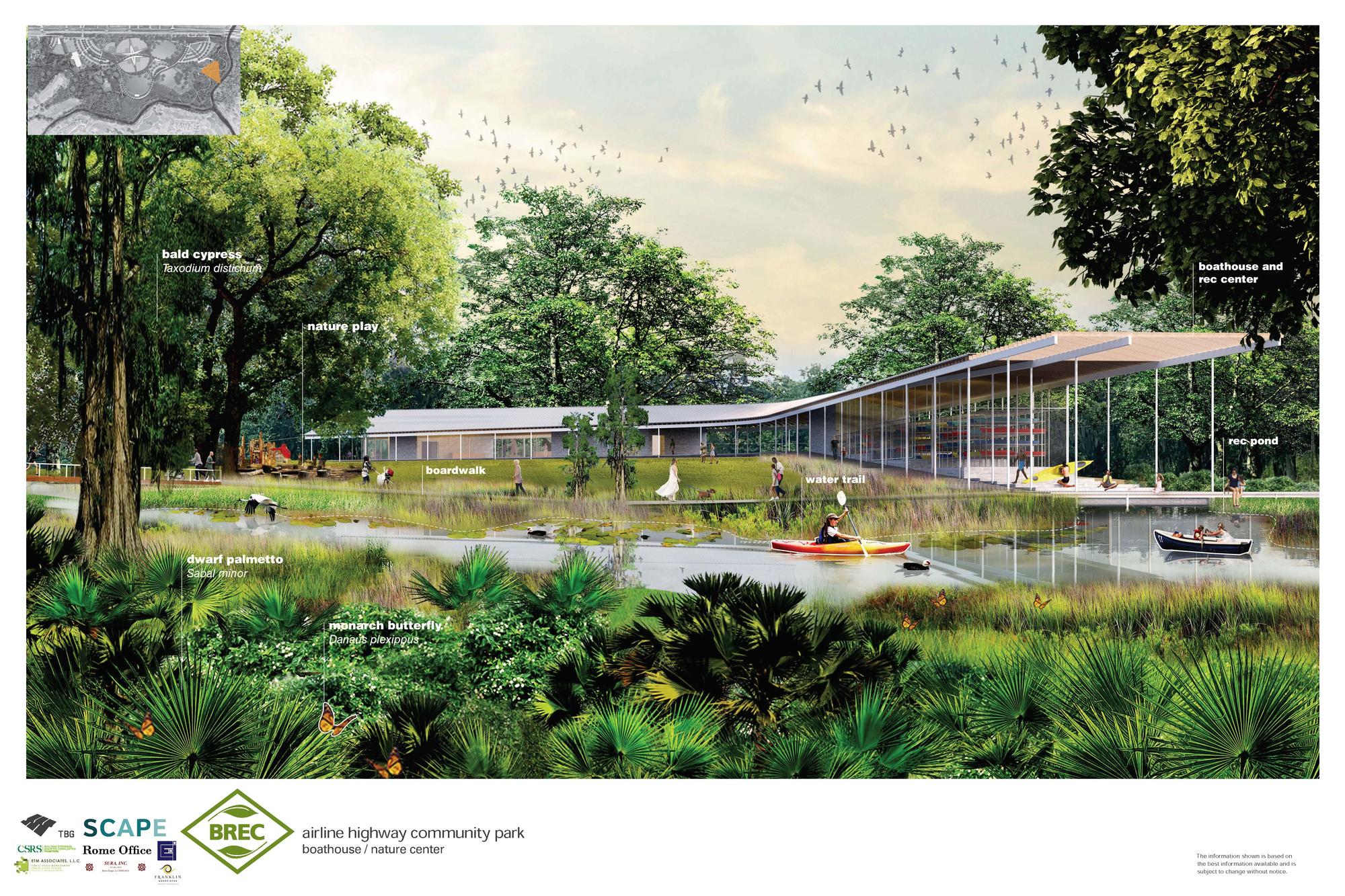 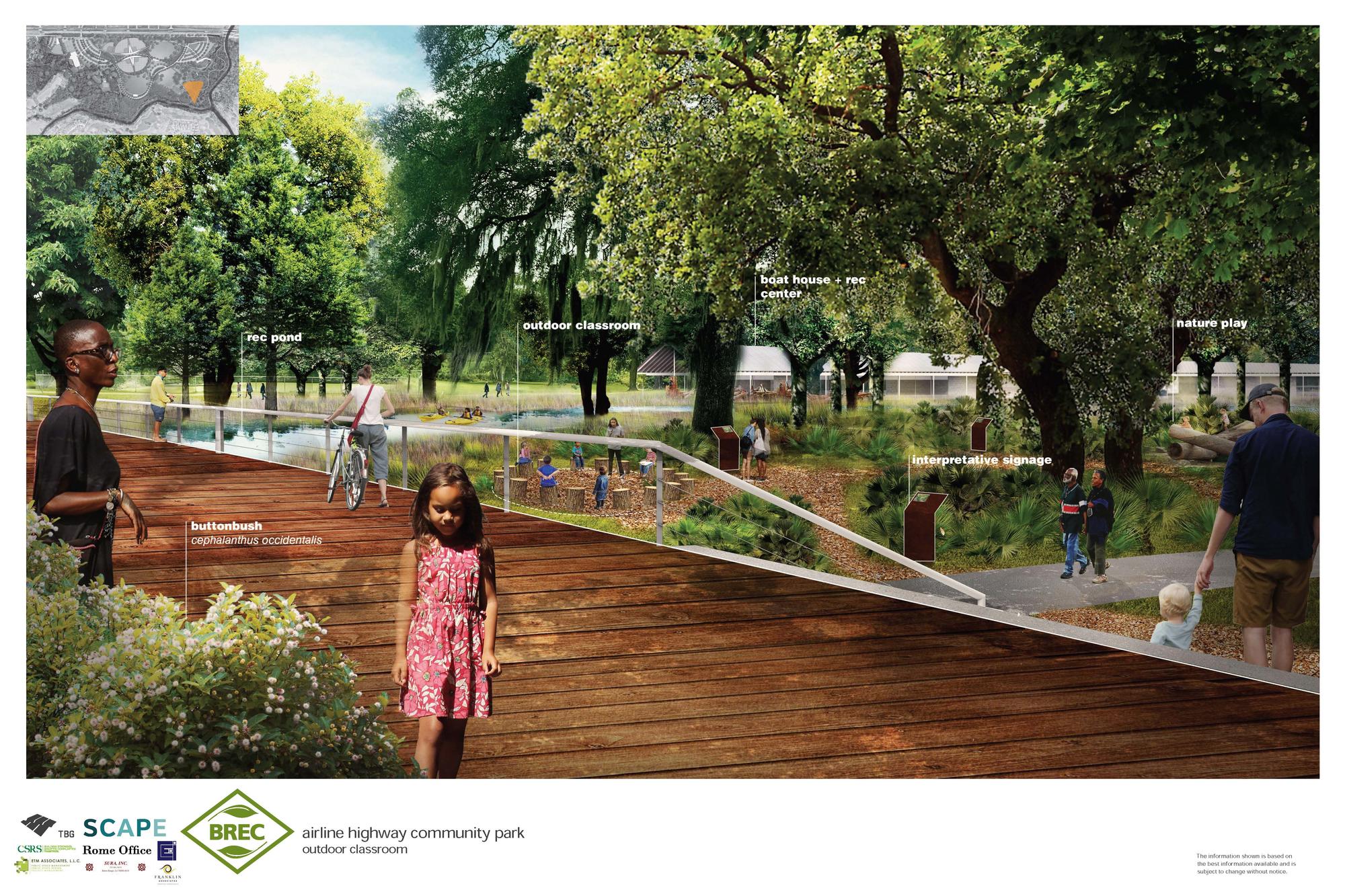 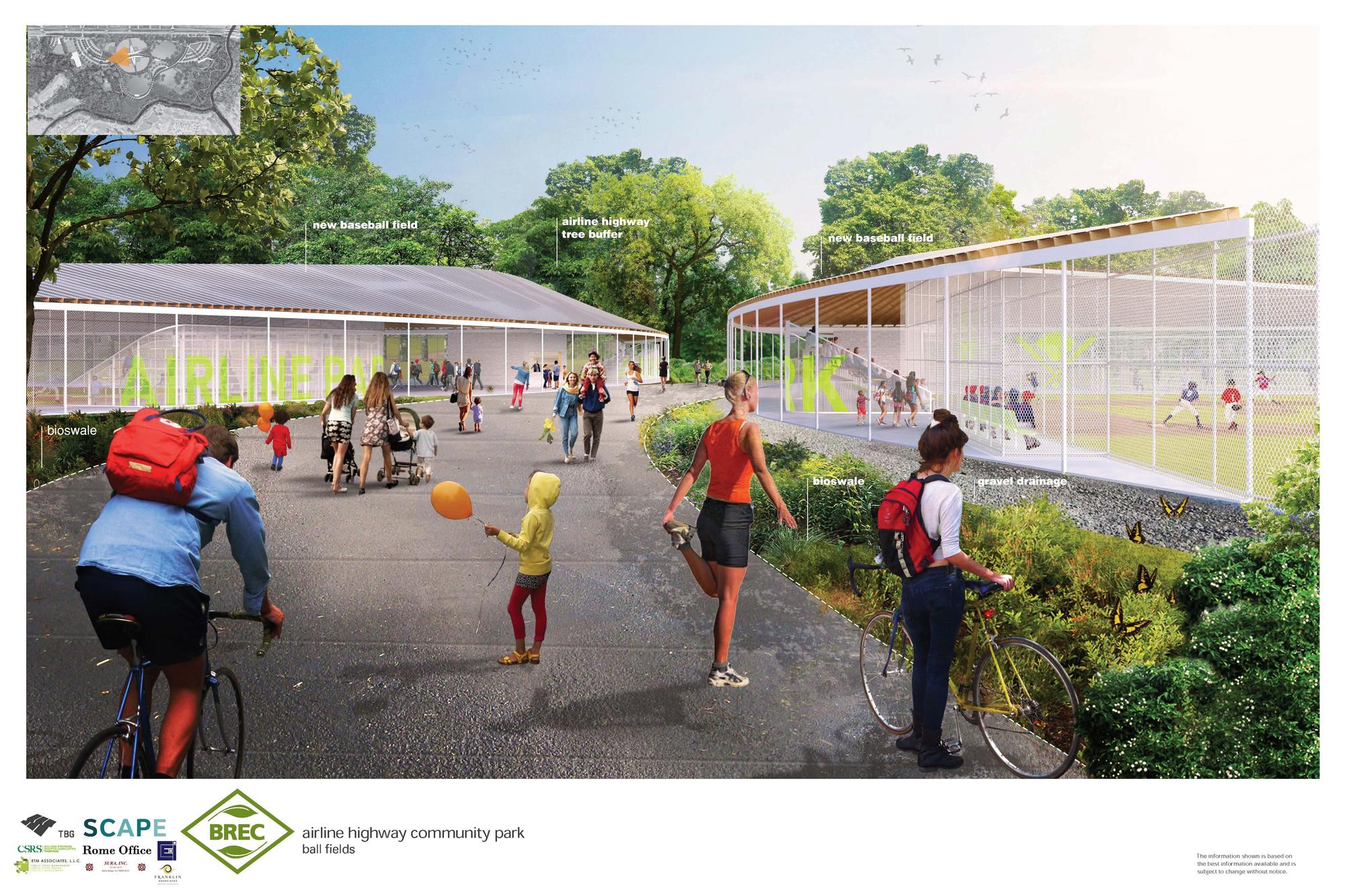 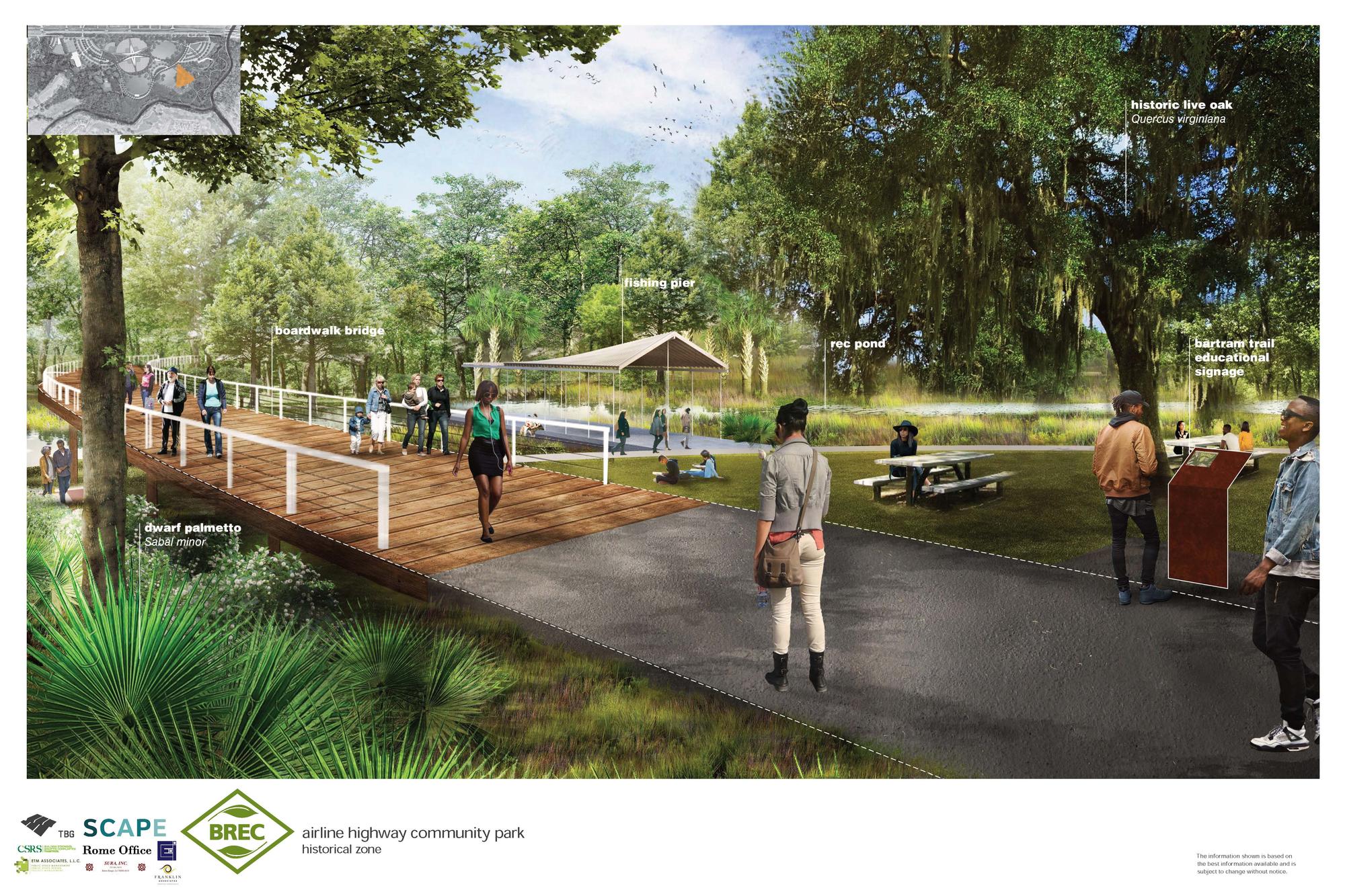 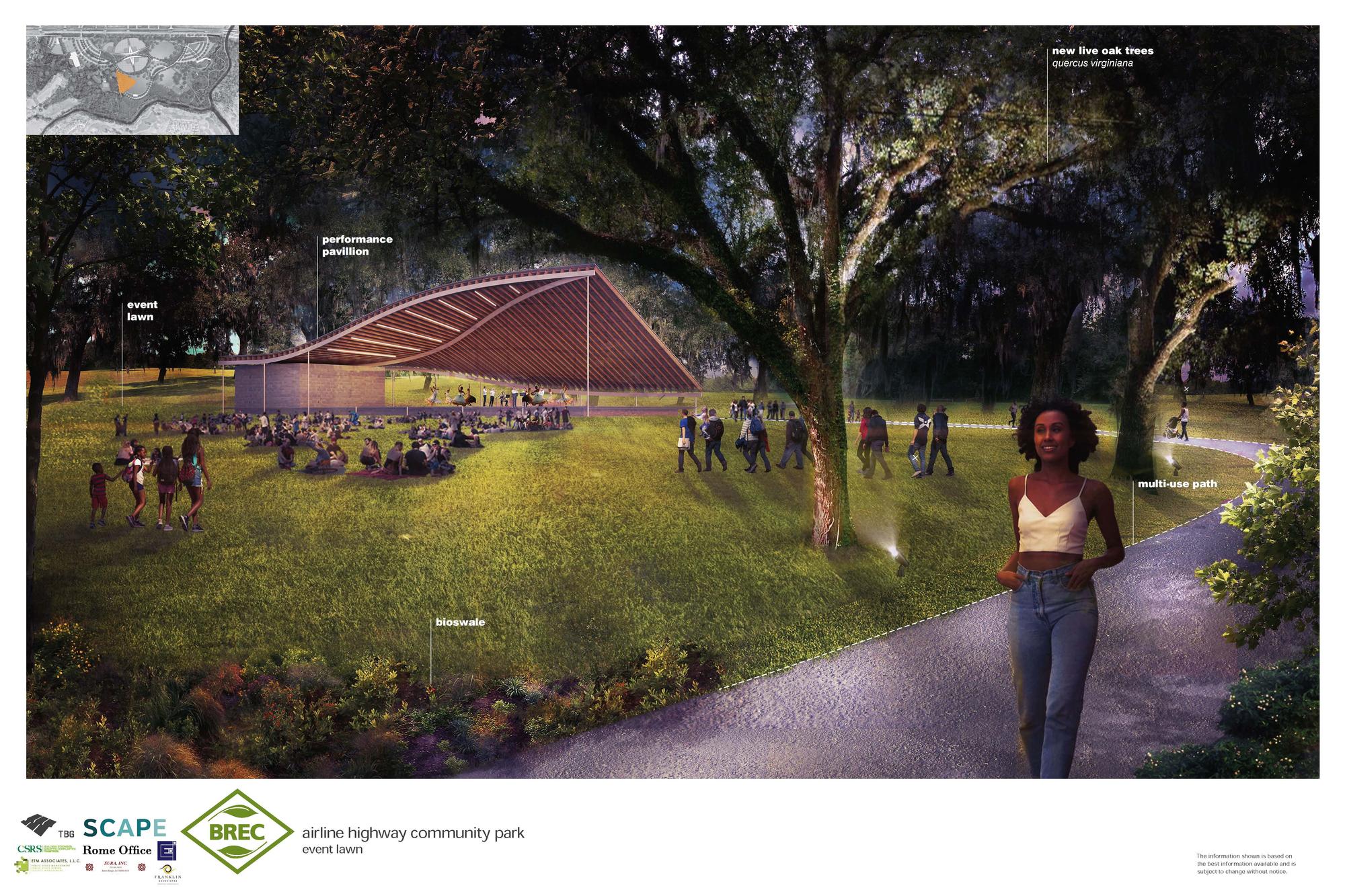 Where is the park?

Visible on the above park map are gravel roads providing access to parking for three youth baseball fields and a playground. A second entry (opposite Paladin Drive on US 61) provides access to the center of the property, including grass fields for the annual Greater Baton Rouge State Fair and to an airgun shooting range nestled in the woods towards Ward Creek. A third access towards the south end of the property provides southbound access to US 61. Current information about Airline Park is available at brec.org/airline

Who is working on this project?

BREC has assembled a team of consultants led by landscape architects at TBG Partners and supplemented by a team of specialties.

This 6-month project began at the end of June, 2020 and is expected to be completed by early December, 2020. Click the Project Timeline below to enlarge.

More than five stakeholder meetings have been held during the discovery phase of this project. Stakeholders include businesses, industries, and entities located near the park; clubs and groups currently using the park; nearby neighborhood associations; elected officials and other persons having a keen interest in the park.

A pair of open house events were held on Tuesday, November 10th. Public input was received as written comments and as participation in a visual preference exercise featuring possible park amenities. Additionally, an online opinion poll collected over 780 responses.

Before asking for your comments we're excited to inform you of what the site inventory and analysis process has revealed so far. This data, including guidance from you - the park users - will inform the development of the park master plan. 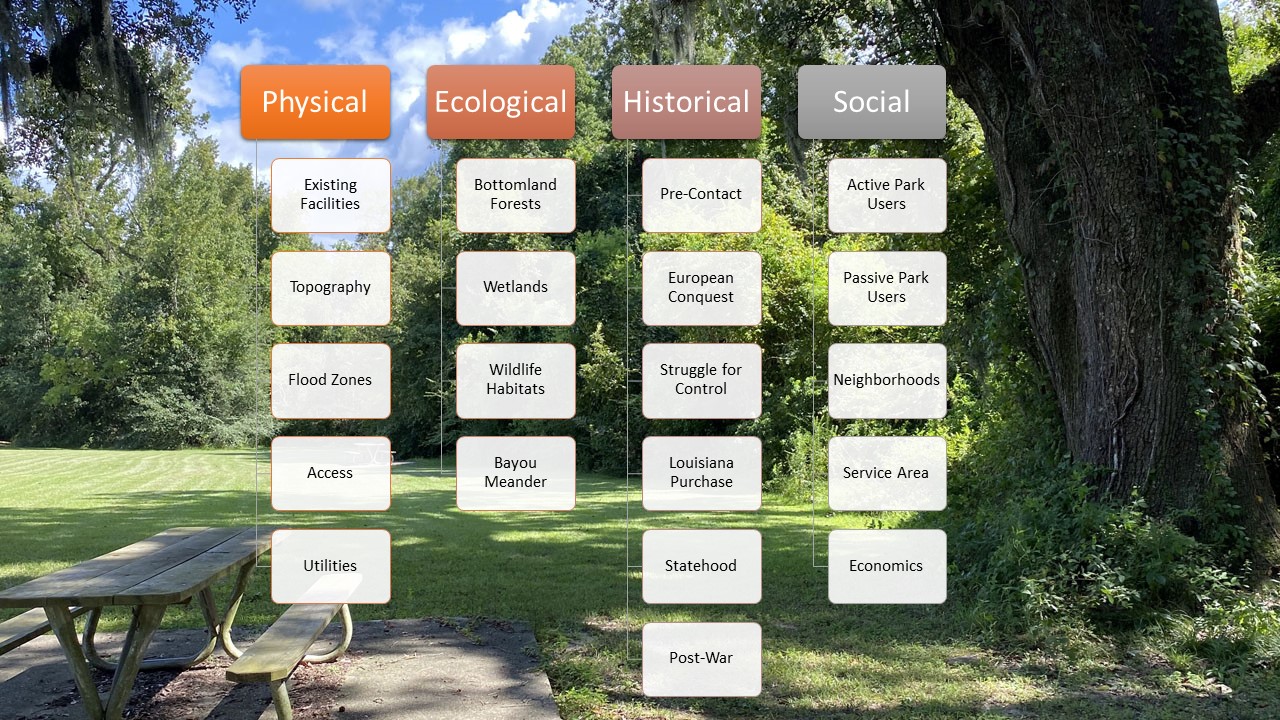 The graphic lists a few of the topics we've researched within each of four categories. Each will be explored more fully - with maps or illustrations - to tell you this story of the park. What we've learned can be grouped into the following categories:

See more about what we've learned▼

The physical attributes of Airline Highway Park include the existing facilities, vehicular access and circulation, the topography of the land and susceptibility to flooding from the bayous, and utilities such as water, sewer and electricity serving the park.

Hover or click the icons on the map to learn about existing park facilities. Each icon contains a bit more information and a photo.

The park property lies at the juncture of Ward Creek and Bayou Manchac which, with their tributaries, drain much of urban Baton Rouge. Portions of this park site flood regularly, and some of the grass parking areas become a muddy mess if storms occur when in use for events. Park lands that remain grey in the illustration - lacking a blue-green overlay - are not flood prone and this was corroborated by photos during the 2016 flood event. 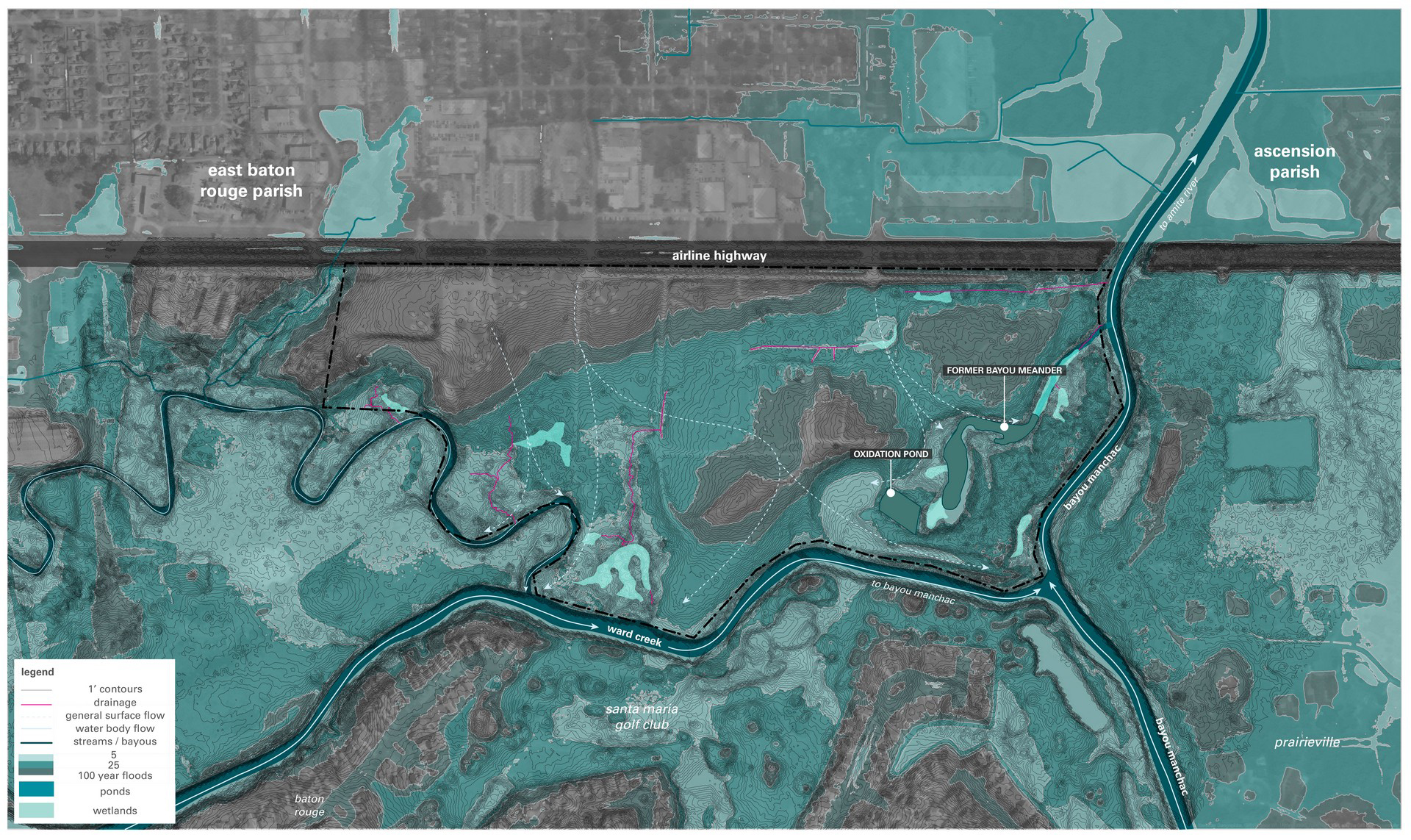 The map displays the FEMA flood hazard zones. Much of the site is susceptible to occasional flooding and future recreational amenities will be designed and positioned to avoid or at least to withstand these conditions. 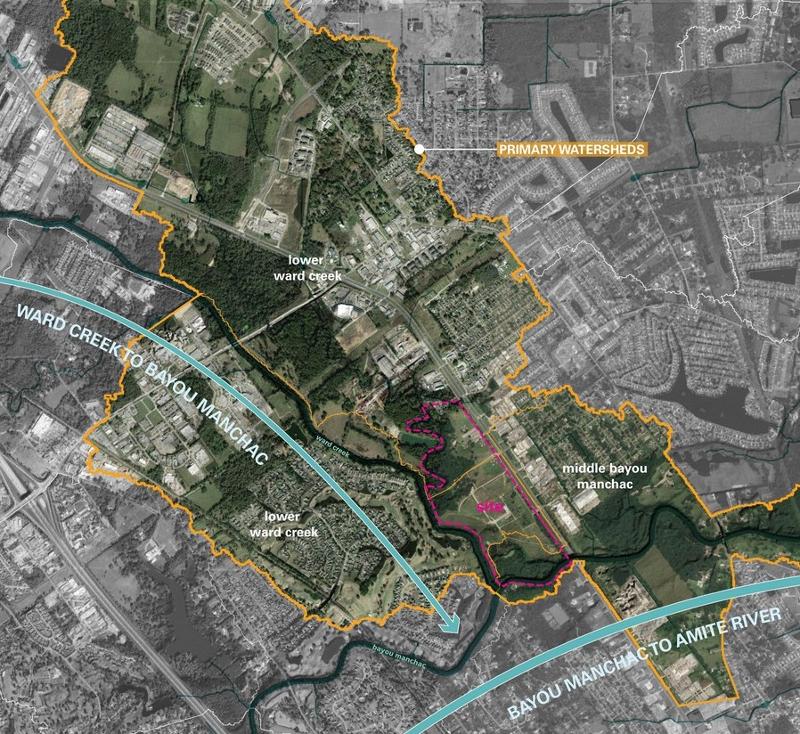 The impacts of watersheds upstream from this park are being considered by the design team.

Baton Rouge's "Great Flood" of August 2016 caused severe damage throughout our parish and beyond. After the rains stopped, the Amite River continued to rise, pushing water back up Bayou Manchac and Ward Creek. Therefore, the worst flooding of our project site occurred days after the storms had passed. 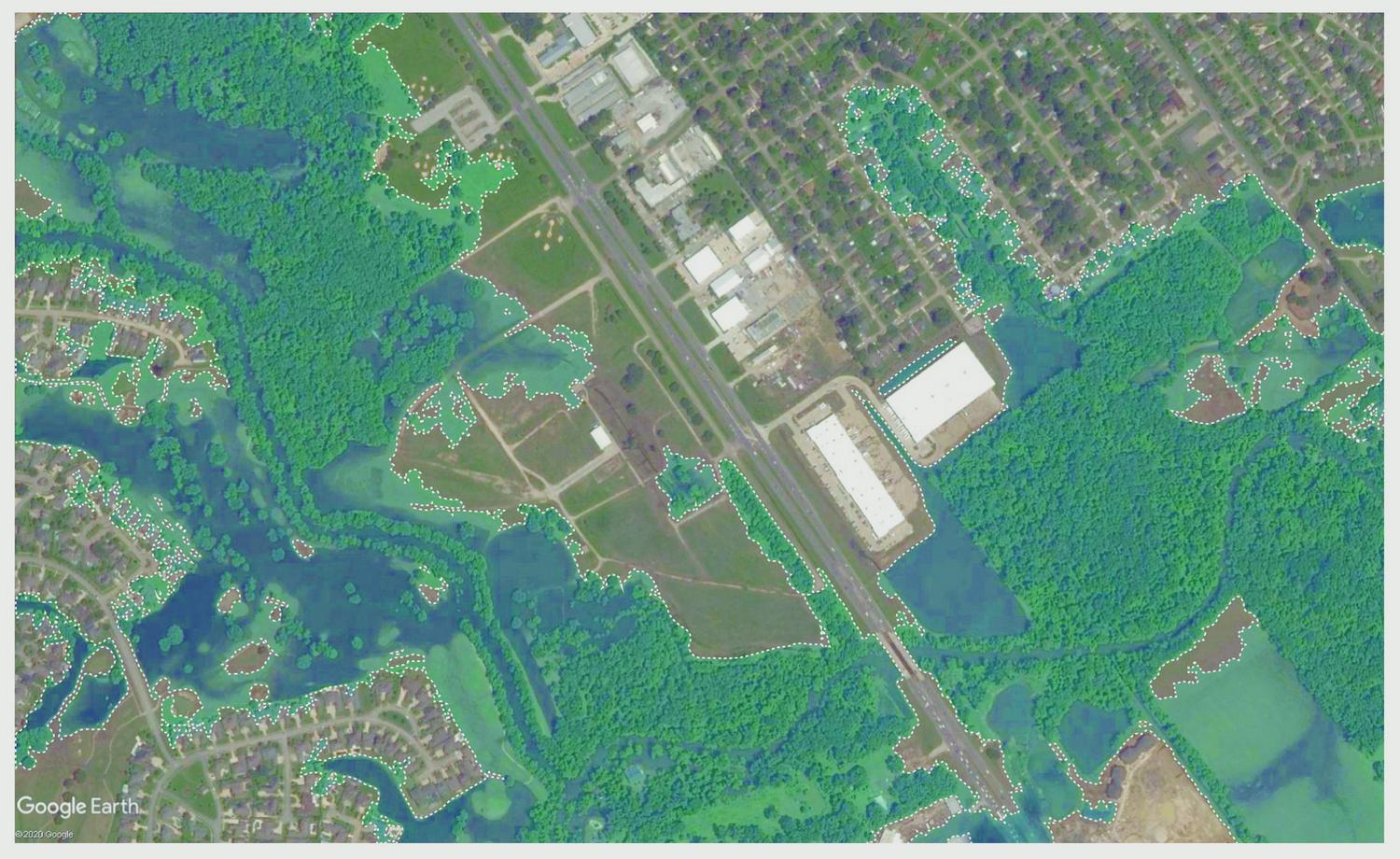 This map suggests flood inundation areas as a result of the 2016 flood. The birds-eye photo below suggests the flooding was worse 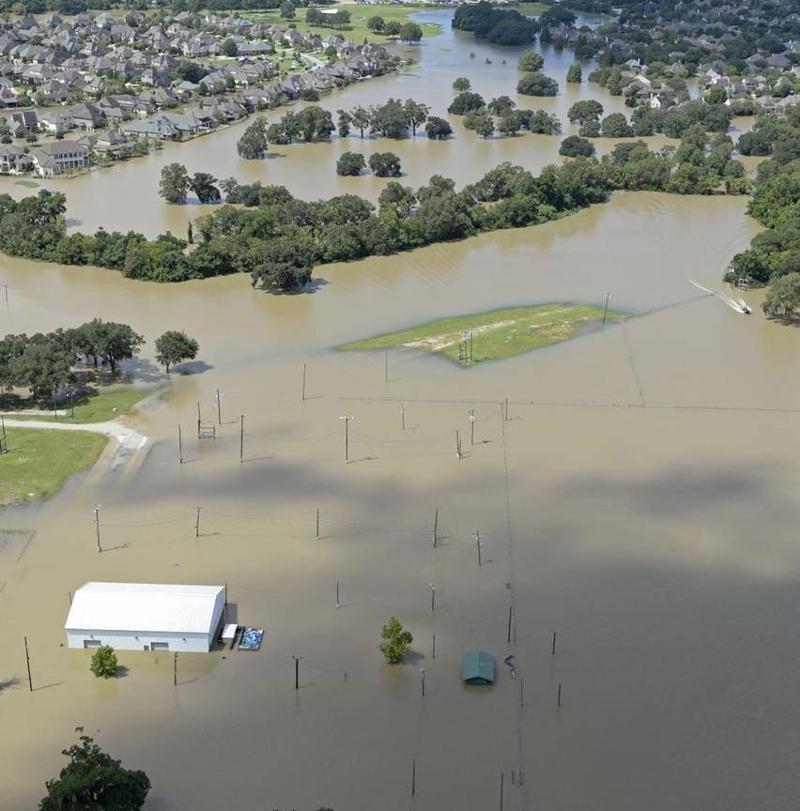 Birdseye view of flood waters during August of 2016. The homes in the distance are Santa Maria. 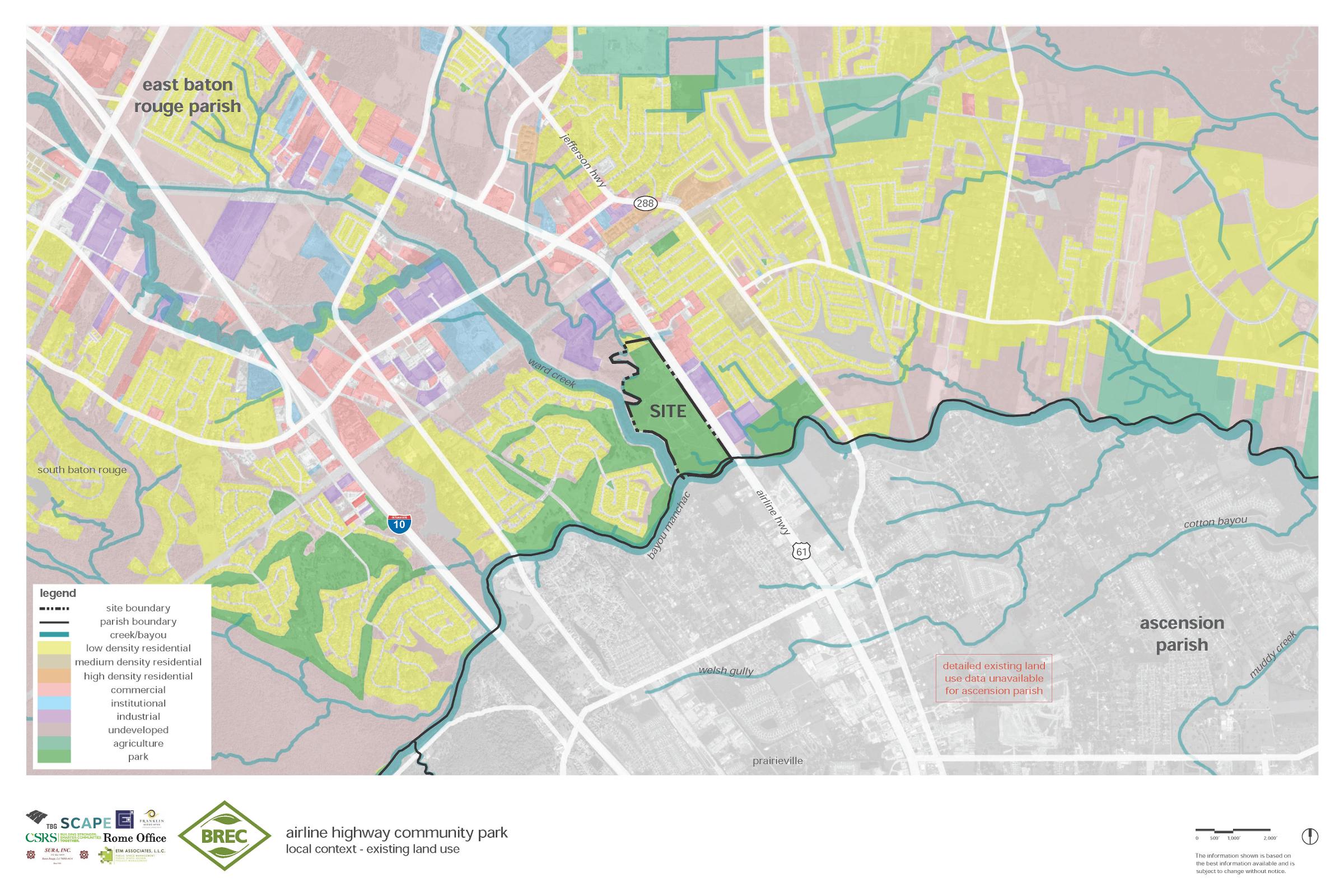 Aside from paddlers on the bayous, the only park access is from its frontage on Airline Highway, and most properties along the highway are commercial or industrial. The park is bounded by water on almost all three remaining sides, excepting a residential parcel on the north side having four mobile homes. The above map shows the existing land use in East Baton Rouge parish near the park. The two images below zoom in on that area. 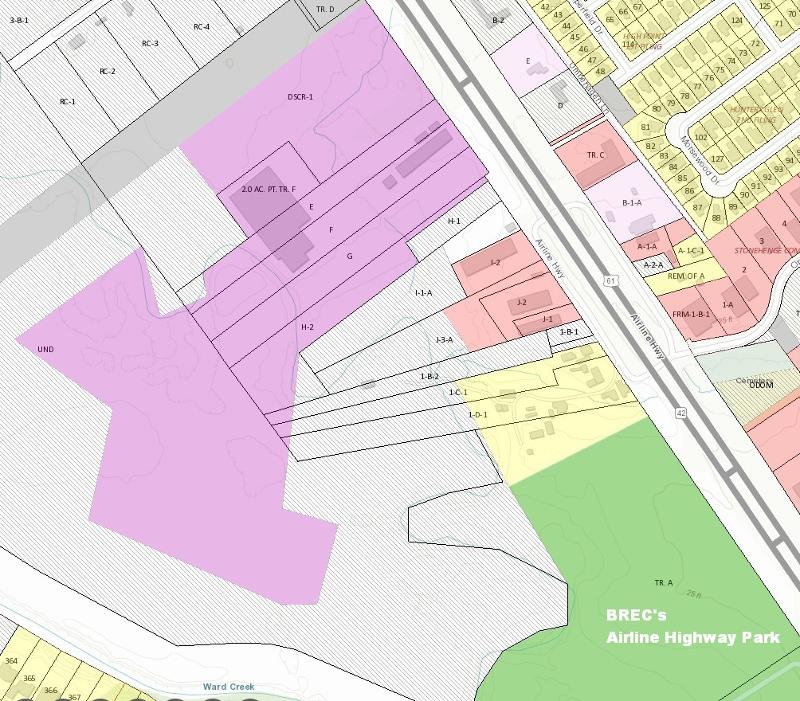 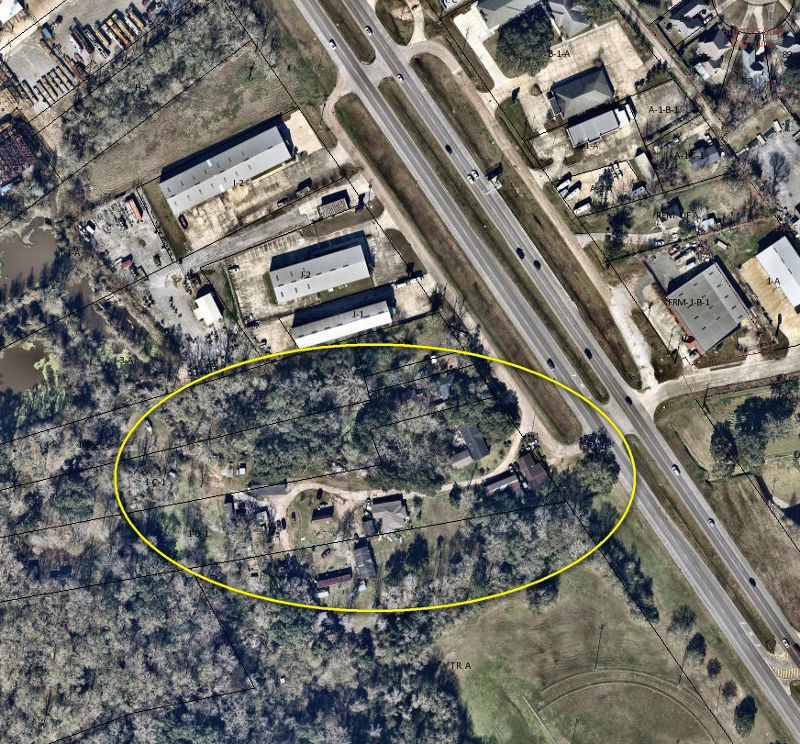 A current air photo shows that these residences are buffered by trees from the park and from commercial / industrial uses to their north. 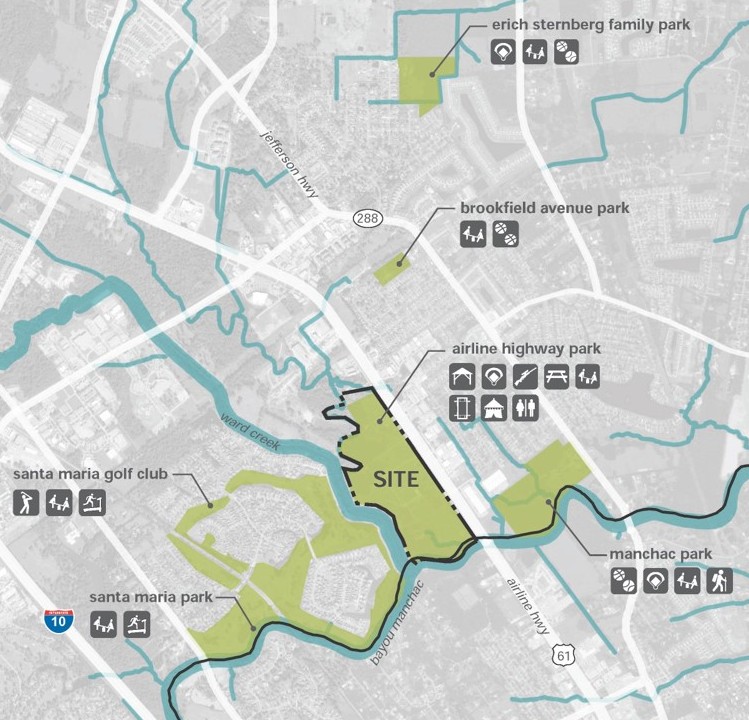 BREC has other properties near Airline Highway Park and four of these lie along Bayou Manchac or it's tributary Bayou Fountain. Upstream immediately across Ward Creek is Santa Maria Park and Golf Course. Six miles upstream via Bayou Fountain is Highland Road Community Park. In the downstream direction, barely 1,000 feet across US 61 (and across one commercial parcel) is BREC's Manchac Park, and less than five miles downstream "as the crow flies" is BREC's Kendalwood Road Conservation Area, located near the terminus of Bayou Manchac at the Amite River.

A well used nature trail at Manchac Park, and an equally well used paddle-sports launch at Highland Road Community Park suggest opportunities for expansion and interconnection of this network, with Airline Park serving a prominent role. 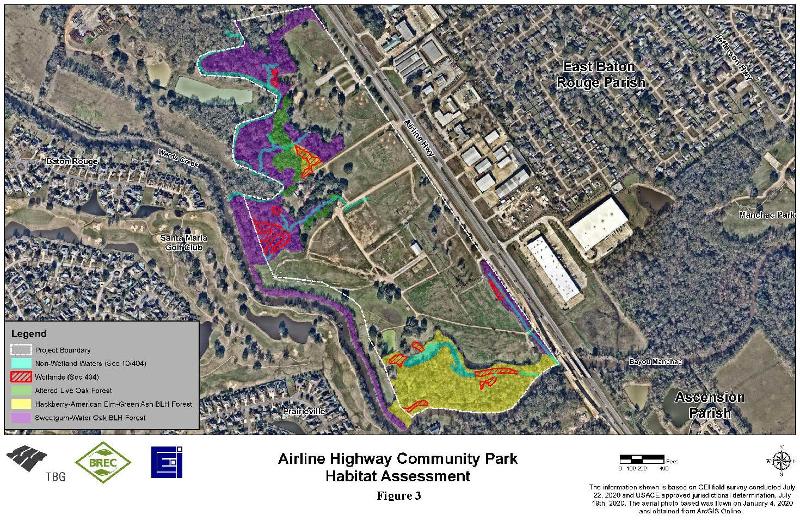 Team member Coastal Environments conducted an inventory of habitats in the park, including forest types, wetlands, and drainage channels.

Climate, soils, topography, and water intersect to determine the ecological habitats occurring on a site. A passer-by on Airline Highway might assume that the park is all mowed fields, but in fact roughly one-quarter of the property is forested. The graphic identifies various plant communities, forest types and wetlands found on the property.

Our team, in collaboration with BREC's Natural Resource Management staff, is learning more about the flora and fauna of Airline Highway Park. We've identified the presence of specimine trees (possibly even a "champion" tree for the parish), rare herbaceous plants, and use of the habitat by migratory birds. Three primary forest types identified in the study are Bottomland Hardwood, Hardwood Flatwoods, and of special interest is an area of Live Oak Natural Levee Forest which is classified as imperiled in Louisiana. Removal of exotic species and provision of access through managed trails will strengthen the value of the site as wildlife habitat and as an environmental education amenity. Several low-lying areas along the bayous are wetlands and the south end of the property features a slough, presumably a former meander of Ward Creek entering Bayou Manchac.

We know Louisiana is rich with history and culture. Our team's research has revealed some very interesting and unique facts about Airline Highway Park that we're sure you will find interesting. Through thoughtful park planning and exhibit design, the park can become an outdoor classroom both of the natural world and also of the internationally relevant history of our region. Below are just a few highlights, beginning with an interactive map.

Pre-contact refers to the period of time prior to European exploration of North America. 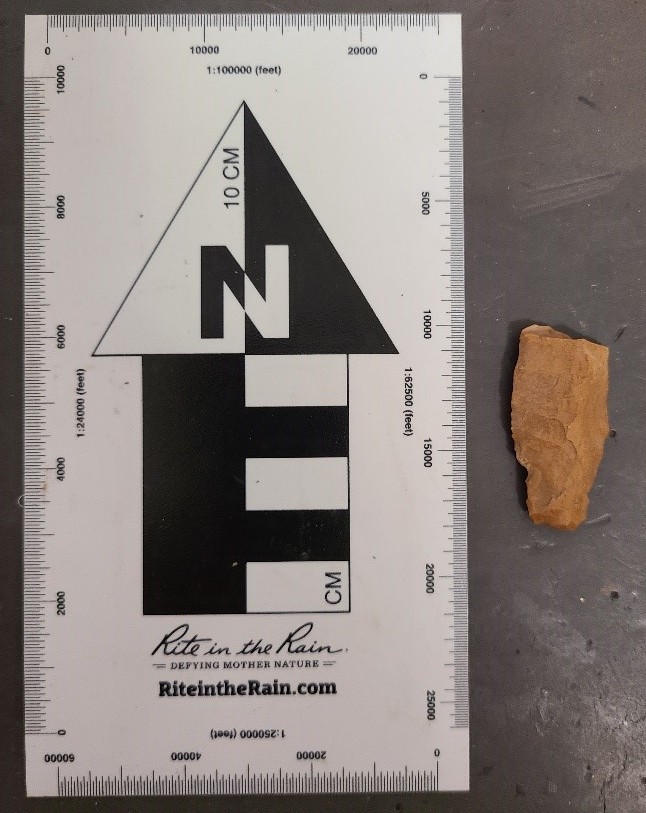 Design team member SURA has identified artifacts collected from Airline Highway Park as evidence of settlement by native American cultures dating from 700 CE. A site record form is being completed for submission to the State of Louisiana's Division of Archaeology. Of interest is that decades ago, SURA aided with the research of middens found at the "Klienpeter Site", located several miles upstream (west) at the confluence of Bayou Manchac with Bayou Fountain and Alligator Bayou. The lands along our bayous have long been inhabitated by mankind.

A Border Between Nations▼ 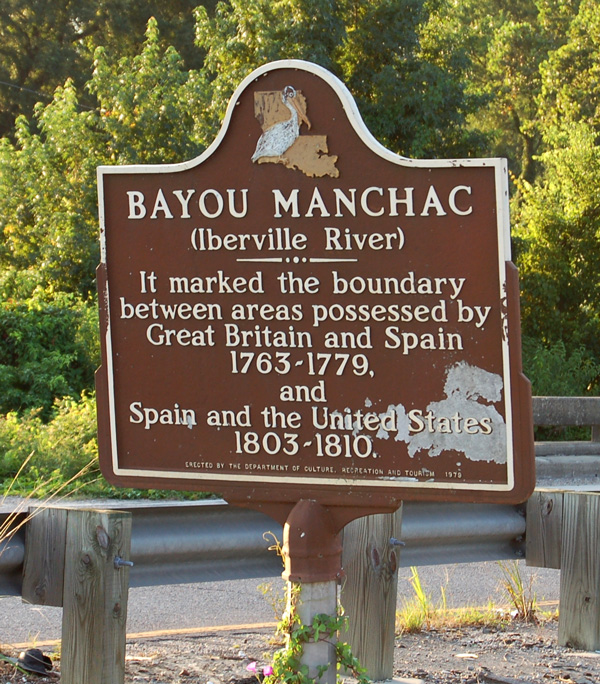 Isle of Orleans - A historic marker positioned where US 61 crosses Bayou Manchac denotes the "Iberville River" as an international boundary: first between lands possessed by Great Britain and Spain (1763 - 1779) and later between Spain and the United States (1803 - 1810.) 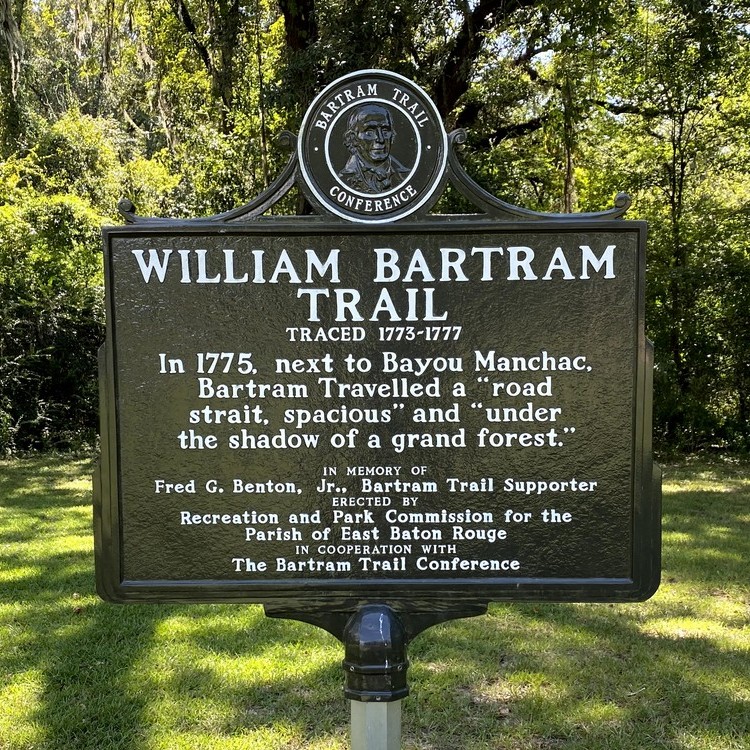 A historic marker placed within Airline Highway Park commemorates the travels of naturalist William Bartram through the area.

William, son of John Bartram, traveled through the southern US territories collecting plant specimens for a patron in London. He completed his travels in Pointe Coupee Parish - and he walked a primitive road along Bayou Manchac to get there. He and his party disembarked their boats where Bayou Manchac meets the Amite River. Though lost to history, the exact position of this old wagon road through the forest might have crossed Airline Highway Park, but likely followed the high ground to present-day downtown Baton Rouge. Bartram's work in Louisiana preceded John James Audubon by 46 years.

Prior to good roads, bayous served as transportation corridors and Manchac was no exception though it was periodically impeded by snags. Early steam-powered vessels serviced Hope Villa, Santa Maria, and other nearby plantations - linking them to New Orleans via Lakes Maurepas, Pontchartrain and Bayou St. John.

Six decades of aerial photos of Airline Highway Park are sequenced in this short video.

Social aspects of Airline Highway Park describe the way the park is used today. The design team is conducting a series of online meetings with key Stakeholder Groups to gain an understanding of the park from their perspectives. 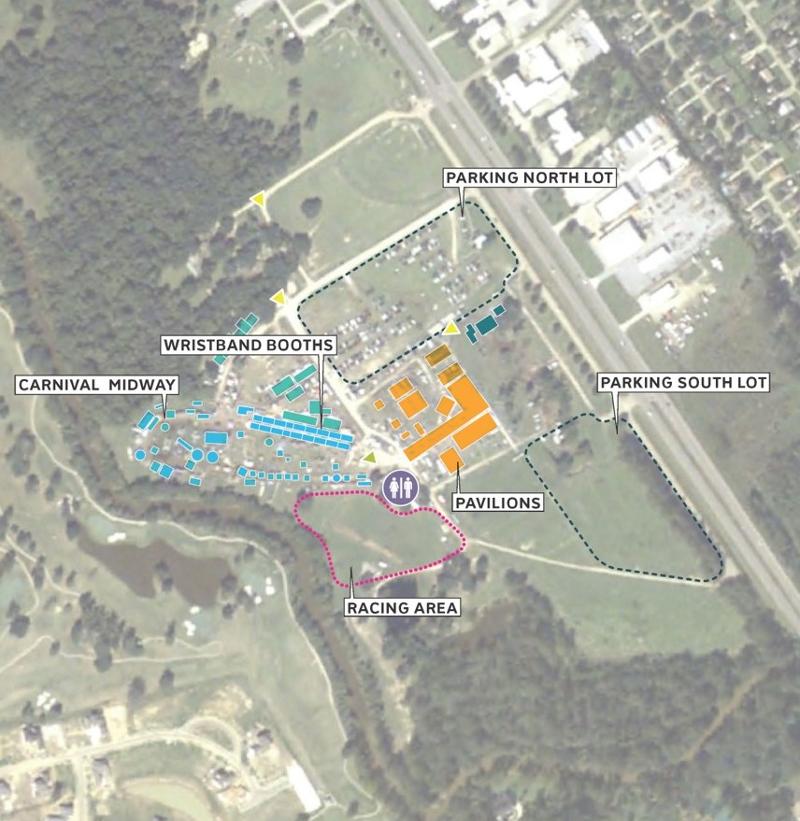 Since 1965 this property has been the home of the Greater Baton Rouge State Fair. The diagram depicts the layout of the fair including areas of parking, the midway, rides and other components. In fact, the Baton Rouge Jaycees purchased this property in 1971 to ensure continuation of this annual event. BREC purchased the property from the Jaycees in 1985 and the fair has continued annually since that time.

The four existing ballfields are utilized by local youth baseball leagues. One concern we've heard is that highway noise sometimes makes it difficult to hear calls from umpires or coaches. BREC is assessing the quantity of baseball fields to be incorporated into the park master plan.

The air rifle range at the back of the park is operated by the Bayou Airgun Club. This venue attracts competitive shooters from a multi-state region, providing a tourism draw to EBR parish. Founded in 1988, Bayou Airgun Club has been in operation longer than any other club, recently celebrating their 30th anniversary of holding the Cajun Classic meet at Airline Park. The forested environment of the range is seen as an assett and attraction, since a majority of airgun ranges are in somewhat monotonous wide-open fields. 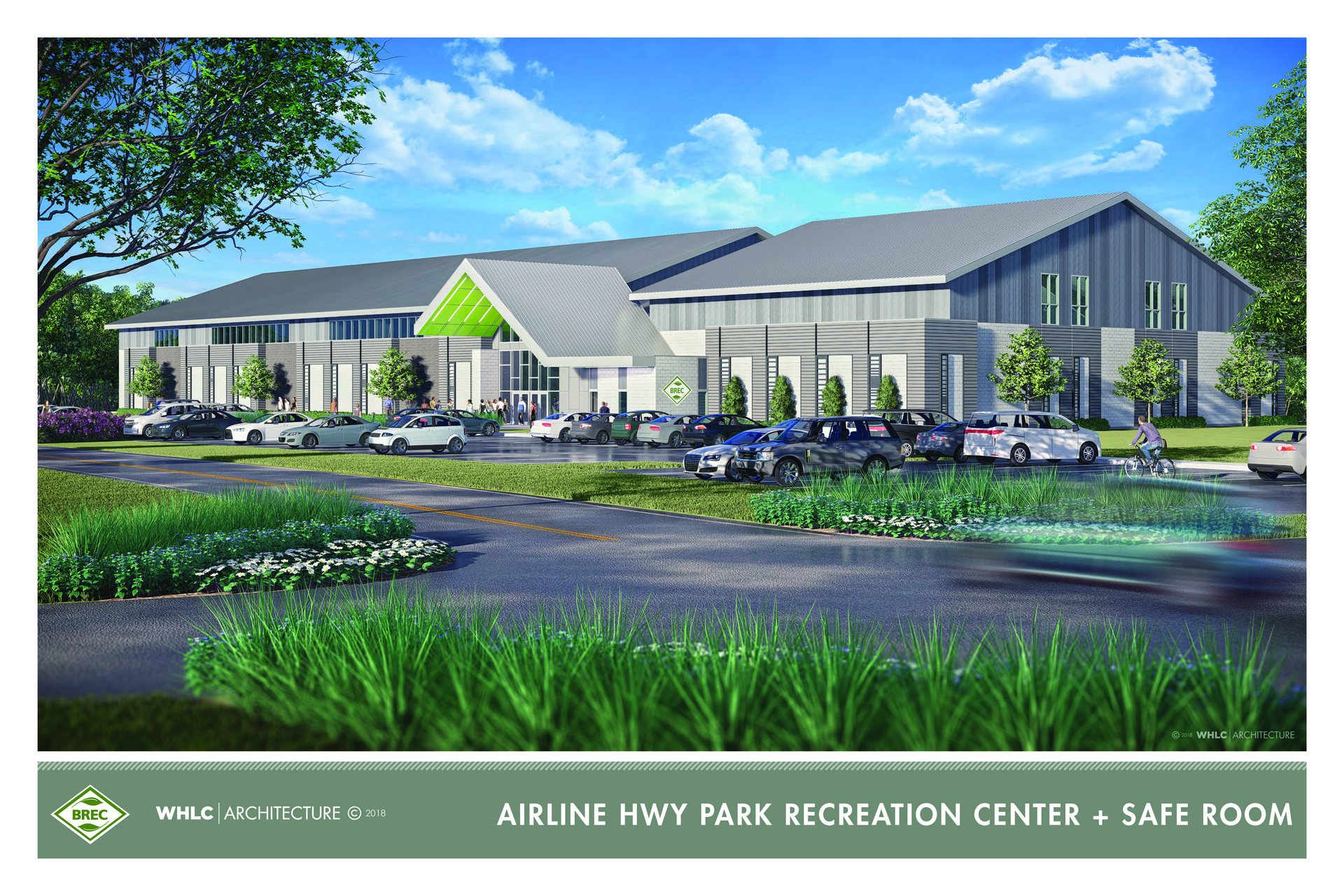 BREC is pursuing a FEMA grant to construct a community safe room at Airline Highway Park. This facility will serve the regional community during catastrophic events such as tropical storms providing resources and housing relief efforts. When not serving in an emergency capacity, the facility will be a community recreation center with flex space. Artist's renderings depict how this facility might look and the graphic below positions it on the park site.