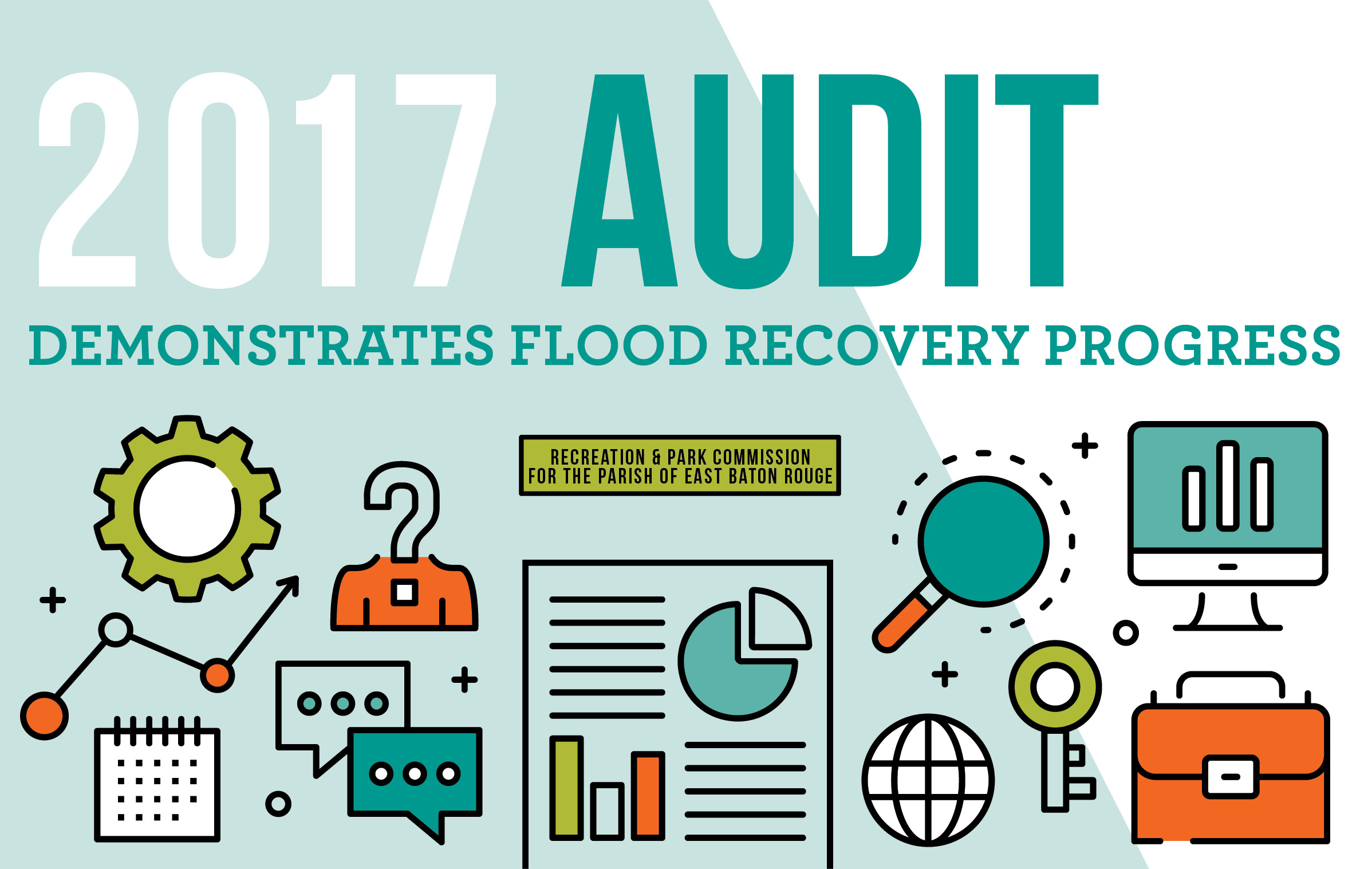 BREC’s external auditor, Postlethwaite & Netterville, has submitted a preliminary draft of BREC’s 2017 annual audited financial statements to the Louisiana Legislative Auditor (LLA) as required by state law. The draft audit report, which cannot be finalized and released publicly until it is reviewed and approved by the LLA, shows that revenues generated from BREC’s programs and services have returned to pre-flood levels – increasing from $9,839,713 in 2016 to $10,137,338 in 2017, or a total increase of 3%. These funds are collected from park, facility, and program admission and user fees and help BREC offset the cost of operations while lessening the burden on taxpayers. Revenues increased even though many BREC facilities have not yet returned to their pre-flood condition as the agency continues to work with FEMA on its recovery from the flood.

Overall, total agency expenses increased $6.3-million when compared to last year for a total of $75.2-million. Most of this increase is attributed to a $3.85-million court judgment resulting from an employee vehicle accident in a parking lot and a more than $1.5-million increase in recorded net pension liability, a new GASB requirement. BREC continues to dispute the court judgment.

BREC is required to contribute to the City-Parish retirement fund and those contributions equaled $5.4-million in 2017, an increase of approximately 7% when compared to 2016 and an increase of more than 12% over the last two years.

In 2017, BREC’s Planning and Engineering Department completed more than 30 major projects funded through the Capital Improvements Fund which include: the completion of Knock Knock Children’s Museum, the expansion of Liberty Lagoon Water Park with the only surfing simulator in the state and two new thrill slides, the expansion and air conditioning of five recreation centers, the first boat launch in the BREC system, six neighborhood park improvements and more. These major capital improvements completed in 2017 are in addition to BREC’s ongoing park operations and regular maintenance activities across the system’s more than 180 parks and facilities across the parish.

At the end of 2017, BREC’s overall fund balance of $90,991,557 represented an increase of $930,801 over 2016, or less than 1%. Of that, only 20% or $17-million is available for spending at the Commission’s discretion, down from 23% or $20-million at the end of 2016. The remaining $74-million of the fund balance is either restricted for specific uses as required by law or assigned by the Commission to fulfill the promises made to the public for other specific purposes in the Imagine Your Park tax initiative. In 2016, BREC’s overall fund balance was reduced from $97-million to $90-million as a significant amount of capital projects were completed in 2016.

While the auditors included the reconciliation of balance sheet accounts such as cash, accounts payable and inventory as a finding for consecutive years, this was primarily due to a major upgrade to the agency’s previously antiquated accounting software. Additional measures have been put in place to ensure these reconciliations are being performed accurately and consistently going forward, with key accounts are currently reconciled through May 31, 2018. The two reconciliation findings were the only findings included on the preliminary draft report for 2017.

“At BREC, we take our responsibility to wisely manage tax dollars very seriously, and that is why we have been diligently assessing the efficiency and effectiveness of our many departments and processes over the past two years,” said BREC Superintendent Carolyn McKnight. “This process allows us to audit ourselves year-round and to continuously find ways to improve our processes and better serve the community.” said McKnight.

Through these efficiency and effectiveness measures, including the hiring of a dedicated Internal Process Review Manager, BREC detected and reported three instances of employee misappropriation. The swift action taken as a result led to the termination and prosecution of one employee and the agency receiving full or partial reimbursement of funds in two of the three other instances. A fourth instance of misappropriation is due to a member of the public breaking into City Park Golf Course and stealing golf carts. That is an ongoing police investigation

“BREC is proud to employ more than 1,200 full-time, part-time and seasonal staff to serve the citizens of East Baton Rouge Parish. However, as with any large and complex organization, there is always the potential to employ individuals with ulterior motives. I have very clearly communicated that if you steal from BREC, you will be fired and arrested,” said McKnight. “We require every staff member to undergo annual ethics training and we let staff members know that we will report any instance of theft, no matter how small, to law enforcement and to the Legislative Auditor. The taxpayers entrust us to run a responsible agency with their tax dollars and we will continue to be vigilant on behalf of them in all we do,” said McKnight.

Once the audit is finalized and released by the Legislative Auditor’s Office, it will be posted on BREC’s website at brec.org/Finance.