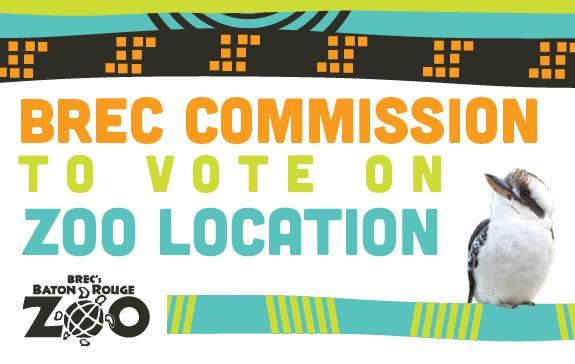 Thursday, March 22, the BREC Commission will hold its regularly scheduled meeting at 5 p.m. at 6201 Florida Boulevard. The meeting will include a presentation from outside experts who have evaluated BREC’s Airline Highway Park as a feasible site for the Zoo.

The presentation will include information from engineers who have proposed a flood detention and mitigation plan to make the site and the surrounding area safer from potential flooding, an analysis of the potential impact from traffic engineers, a preliminary environmental impact report, and conceptual drawings from nationally recognized zoo experts, along with BREC staff’s recommendation for an alternate site for the Baton Rouge Zoo.

“We understand that this is an emotional issue and that change is hard for any community,” said BREC Superintendent Carolyn McKnight. “Thursday night we plan to lay out a factual, achievable plan that will lead the way toward the creation of a world-class Zoo that has less reliance on taxpayers, support from the philanthropic community, sustainability in our community and greater appeal to visitors from near and far,” said McKnight.

BREC has moved deliberately every step of the way during this planning process that began several years ago when one of the Zoo’s beloved elderly elephants, Judy, died from a lengthy illness. After Judy died and Bozie moved to her new home in Washington, D.C., BREC leadership embarked on a fundraising campaign to build a new, $10-million elephant exhibit that would be in compliance with modern national Association of Zoos and Aquariums (AZA) standards but quickly learned that donors were more interested in funding the modernization of the entire zoo rather than just one exhibit.

Furthermore, BREC found that these investments hinged on researching the possibility of a more visible and sustainable location that could serve more people, generate more revenue to lessen the burden on taxpayers and be more accessible from a major highway or Interstate. Given these findings, a feasibility study was subsequently conducted that examined the long-term viability of the current Zoo site when compared to the criteria for success that would define the most sustainable site for future Zoo operations in Baton Rouge, upon which all recent efforts – including the Commission’s approval in August 2017 to proceed with identifying the most sustainable alternate site for the Zoo – have been based. Pending the Commission’s approval of BREC staff’s recommendation on Thursday, staff will immediately begin working on a master plan and detailed business plan, including fundraising, to support the fulfillment of the vision for a re-imagined Baton Rouge Zoo as well as Greenwood Regional Park.

“In 2004, residents approved funding to initiate the Imagine Your Parks (IYP) plan, which was based on very clear public feedback that the community’s top priorities in this plan were trails, larger community parks with more high-quality features and renovated neighborhood parks,” said McKnight. “BREC kept its promises to taxpayers and is creating a growing trails system both inside parks and out, as well as the creation of twelve community parks strategically located across the parish.”

“Building a new Zoo through this funding mechanism would have required the investment of nearly every dollar of IYP funding along with BREC’s entire construction budget for a 10-year period. The Baton Rouge Zoo did receive the largest investment of any single facility from IYP dollars but there simply was not then, and is not now, enough money available to renovate the entire facility. That is why our Zoo, and all successful zoos around the country, rely heavily on private donations to create memorable wildlife experiences and serve as vital entertainment and educational destinations for their communities – just one of the many criteria we have considered in preparing our recommendation to the BREC Commission for an alternate location for our Baton Rouge Zoo,” said McKnight.

Attached is information that will be presented to the Commission on Thursday, including a fact sheet explaining why this scenario makes the best business sense for both the Zoo and a re-imagined Greenwood Regional Park, the final report on the flood mitigation analysis conducted by external engineers, and an independent analysis of the Baton Rouge North Economic Development District’s economic impact assessment of BREC’s proposal that includes an objective review by a noted Baton Rouge area economist. All other supporting documentation will be finalized before and presented at the Commission meeting on Thursday.