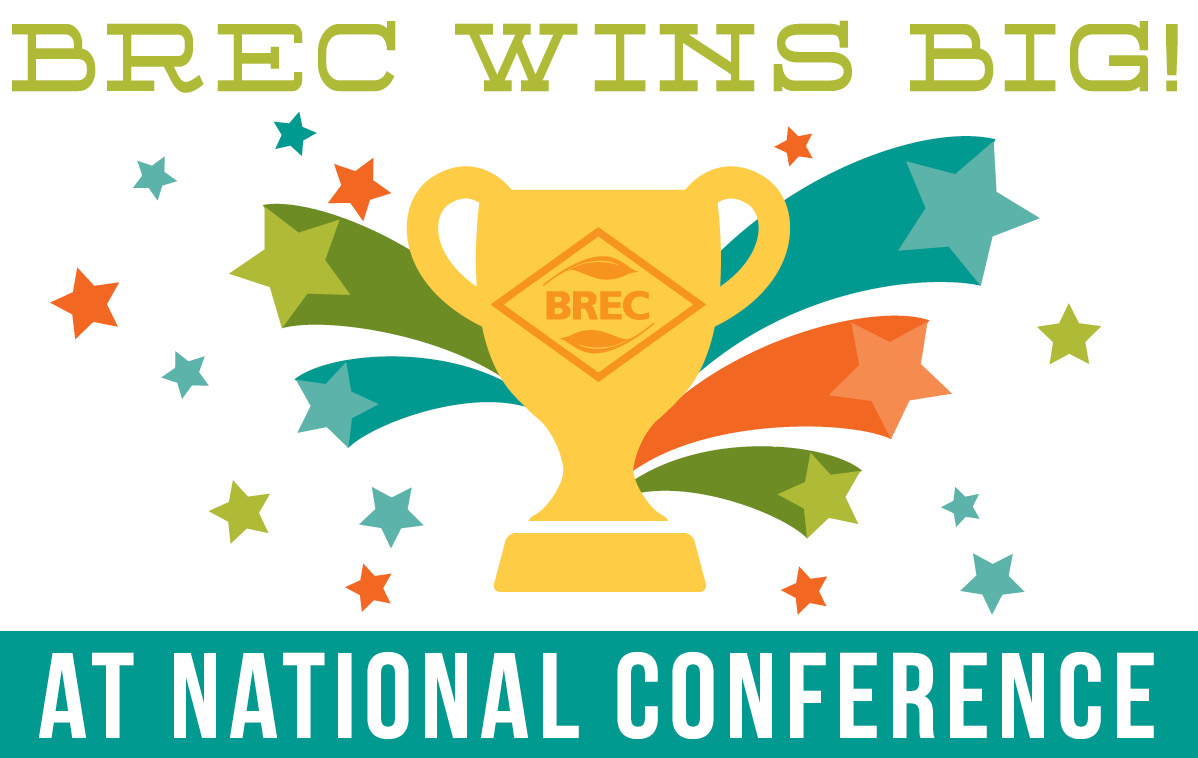 New Orleans LA, September 26 2017 – The National Recreation and Park Association (NRPA), announced at its national conference in New Orleans that BREC won two national awards including the Excellence in Innovative Programming Award for BREC’s LEO Program which is working to bridge the gap between law enforcement and young adults, teens and youth and Project ARK: Animals Reaching Kids which brings Zoo staff and animals into science classes of low-income students to strengthen their STEM skills and develop an understanding of the importance of conservation efforts in our area and around the world.

Also, for the second year in a row and the 13th time in its history, BREC has been named a finalist for  the National Gold Medal Award for Excellence in Park and Recreation Management. Founded in 1965, the Gold Medal Awards program honors communities in the U.S. that demonstrate excellence in parks and recreation through long-range planning, resource management, volunteerism, environmental stewardship, program development, professional development and agency recognition. Applications are separated into seven classes, with five classes based on population, one class for armed forces recreation and one class for state park systems awarded on odd numbered years.

BREC competed in the Class 1 Recreation category, which is the largest category and includes agencies serving communities with populations over 400,000. Previous winners in this category include the Chicago Park District (2014), Maryland-National Capital Park and Planning Commission (2015) and Cleveland Metropolitan Park District (2016). BREC is a two-time national Gold Medal Award winner (1991 and 1975) and a 13-time national finalist.

Agencies are judged on their ability to address the needs of those they serve through the collective energies of citizens, staff and elected officials.

“The Greater Baton Rouge area suffered its worst summer in modern history last year with the police shooting, civil protests, ambush and murders of police officers followed by historic flooding resulting from 7-trillion gallons of rain falling on the area in a matter of days. Despite hundreds of its own employees suffering flood damage, BREC immediately stepped up to serve the community. Judges considered that information as well as our long-term planning and day-to-day service of the community to determine a winner,” said BREC Superintendent Carolyn McKnight. “it is a special day for us as NRPA has brought approximately 7,000 park professionals to New Orleans for the 2017 conference and we were presented three highly coveted awards in front of our Louisiana colleagues who banded together and sent much-needed assistance to the greater Baton Rouge area last year,” said McKnight.

A panel of five park and recreation professionals reviews and judges all application materials. Judges are chosen for their considerable experience and knowledge in parks and recreation on both the local and national levels.

Since it is located in south Louisiana this year, BREC is playing an integral role in the NRPA conference as attendees will tour BREC’s Liberty Lagoon Water Park to learn best practices when building and expanding an aquatics facility. One of the popular BREC on the Geaux mobile recreation units is on-site to give conference goers an up-close look at the vehicle and the chance to learn about how the program serves children during the summer, at recess during the school year and at community events year-round. Superintendent Carolyn McKnight and BREC team members were also selected to make presentations regarding BREC’s efforts after the difficult summer of 2016, how those efforts garnered the agency positive local and national media attention and how agencies around the country can improve their social media and web offerings for residents in their areas.

For more information on the Gold Medal Awards, visit www.nrpa.org/goldmedal or www.aapra.org.

BREC is the agency that connects people to parks and nature in East Baton Rouge Parish. It is a political subdivision of the state of Louisiana created in 1946 to develop, maintain and operate public park and recreational facilities. Throughout its 70-year history, BREC has taken seriously its responsibility to improve the health, safety, environment and quality of life for all citizens. BREC was among the first park agencies to earn national accreditation and recently earned reaccreditation for an unprecedented fifth time, meeting all 144 standards. BREC is a two-time National Gold Medal Award winner and 12-time national finalist. For more information, visit www.brec.org.

The National Recreation and Park Association is a national not-for-profit organization dedicated to ensuring that all Americans have access to parks and recreation for health, conservation and social equity. Through its network of nearly 60,000 recreation and park professionals and advocates, NRPA encourages the promotion of healthy and active lifestyles, conservation initiatives and equitable access to parks and public space. For more information, visit www.nrpa.org. For digital access to NRPA’s flagship publication, Parks & Recreation, visit www.parksandrecreation.org.

Musco Lighting, LLC is a company that has specialized in lighting systems for sports and large areas for more than 30 years. Musco has pioneered dramatic improvements in energy efficiency and affordable ways to control wasted spill light and glare. Permanent and temporary lighting services range from neighborhood fields to NASCAR super speedways. For more information, visit www.musco.com.