BREC in Partnership with Friends of Hilltop Arboretum and the Bartram Trail Conference Dedicate Trail Marker in Memory of Fred G. Benton Jr. 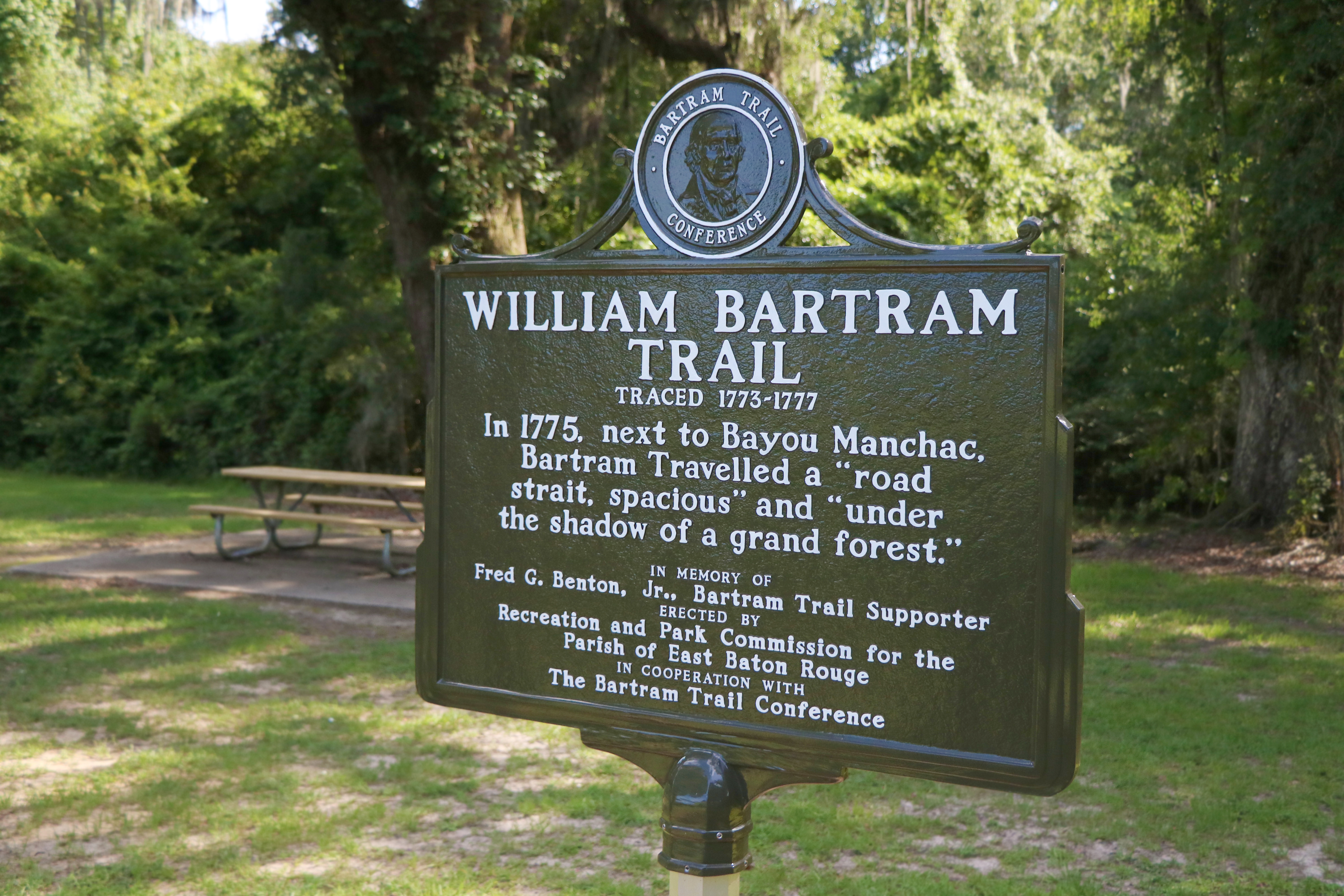 BREC in partnership with Friends of Hilltop Arboretum and the Bartram Trail Conference dedicated a Bartram trail marker in memory of Fred G. Benton Jr. on Friday, June 9 at 6 pm. The trail marker indicates a portion of the route taken by William Bartram, America’s first native-born naturalist artist. Bartram recorded animal and plant life during a four-year trip crossing several southeastern states between 1773 and 1777. The trail marker is located at BREC’s Airline Highway Park at 17200 Airline Highway and Bayou Manchac. The trail marker was dedicated in memory of Fred G. Benton Jr., who was a Bartram Trail supporter and a civic leader in the Baton Rouge Community. A plaque was unveiled in his honor with many of the Benton family in attendance.

Born in 1924, Fred G. Benton Jr. was an active leader in the Baton Rouge community. He graduated from Baton Rouge High School and joined the U.S. Navy. During World War II he served on the naval destroyer USS Black. He then attended LSU where he met his wife, Courtney Benson. Together they had six children. He went on to graduate from LSU Law and joined his father, Fred G. Benson Sr., in the practice of law with a specialization in municipal bonds. Benton was the bond attorney for the City for Baton Rouge for over 30 years. He worked to build new infrastructure around the city including new firehouses, schools, roads and bridges. He did bond work for the development of the East Baton Rouge governmental complex, the Performing Arts Theater, Centroplex and courthouse complex.

Benton was instrumental in the creation of the USS Kidd Veterans Memorial and Museum and the Louisiana Arts and Science Center. He was a preservationist and worked tirelessly to establish Port Hudson State Park, preserving the memory of the fallen soldiers and the park’s history. He collaborated with others to create a state park at the Tunica site to protect the Tunica Tribe (Trudeau Plantation State Park). Believing that all men are created equal, Benton worked diligently with a team of black and white citizens to create the first black owned savings and loan association in Louisiana. He aided in the drafting of the legislation that created the Recreation and Park Commission for the Parish of East Baton Rouge (BREC). He was awarded “Volunteer of the Year” by the Arts and Humanities Council of Baton Rouge and was a recipient of the Golden Deeds award. He was a pilot and flew with the Civil Air Patrol.

Benton was also a naturalist and served as a member of the Bartram Trail Conference working to preserve and make accessible the natural, scientific, historic and cultural areas revealed by William Bartram’s travels. The conference is comprised of members from each of the eight states traveled by Bartram in the late 1700’s. The conference was created to formally commemorate the paths of Bartram and trail markers can be found throughout the eight states. The marker at BREC’s Airline Highway Park is the newest marker and commemorates Bartram’s travels along Bayou Manchac. There are seven markers in the Greater Baton Rouge area and this will be the second at a BREC facility, the other being at Magnolia Mound. BREC Superintendent Carolyn McKnight said, “BREC is so honored that another one of its parks is home to one of the Bartram Trail markers and we are so proud to place this marker at Airline Highway Park in memory of our friend Mr. Fred G. Benton Jr. and his support of the Bartram Trail.”

For more information on the Bartram Trail Conference visit www.bartramtrail.org.